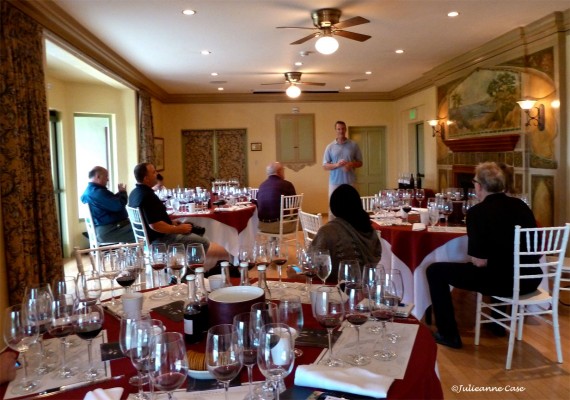 When I entered the room, my eyes saw a sea of wine glasses. I saw 8 glasses at each place. Five of them had small amounts of blending wine along with bottles to replenish the glasses. The sixth had the Rodney Strong Symmetry wine to give us inspiration! Two were empty: a water glass and a glass for the blend.

Robert also explained why wine makers do blends. Short reason: the sum is greater than its parts. For a meritage 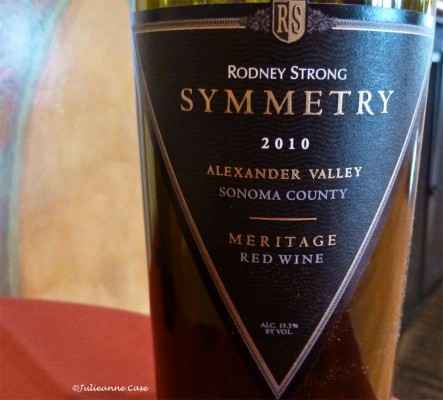 (rhymes with heritage), you can use two or more bordeaux varietals: Cabernet Sauvignon, Cabernet Franc, Merlot, Petit Verdot, Gross Verdot, Carmenere, and Malbec. While he talked, we got to sample the Rodney Strong Symmetry. It was smooth, full in the mouth, rich in flavor, a lovely wine to drink.

Then he explained our task. The glasses were on a special paper mat with circles under each glass for notes. We had five varietals from which we would taste, make notes, then choose the wines for our blend. We had Cabernet Sauvignon, Cabernet Franc, Petit Verdot, Merlot and Malbec. We were given a couple other pieces of equipment, a slender vial that holds 100ml and a calibrated sampling straw to help draw the wine and put it in the tube. 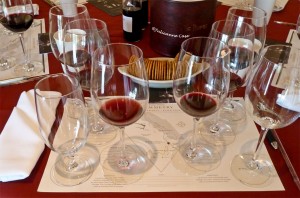 We were to turn in the 100ml to the judge by a designated time. There would be a winner for the blend and another winner for the name, yes we had to come up with a name for our blend. Once we had the talk, the rules, we set to work.

We each tasted our wines, made notes and shared. We all agreed that the Merlot would not be in our blend. We now just needed to decide the quantities of the remaining four. We wanted the color in the Petit Verdot but not the nose! As we each created a small blend in our 7th glass, we began suggesting names. We wanted something sensual, dynamic and calming. I think we did a great job.

After we got our little blends made, we tasted each others and voted. Everyone loved my blend! Now I had to duplicate it! I didn’t expect to feel so much pressure but I did. I managed to recreate my blend. I didn’t really measure strictly. I created it by sense, intuition and knowing so coming up with it two more times, helped me get the numbers.

After the blends were turned in and judged, the results were that our blend was first runner-up and our name,

Serenade, was the winner! Fun evening. I realized that we could blend wines at home if one wine is too harsh and another puny!

One must realize that winemakers may be tasting dozens of clones of the same varietal and/or different vineyards and/or same wine aged in different oak barrels along with other varietals. It’s a real science. And they don’t swallow while doing it either!

Did you ever think so much went into making and blending a wine? Would you ever want to attend a blending lecture?