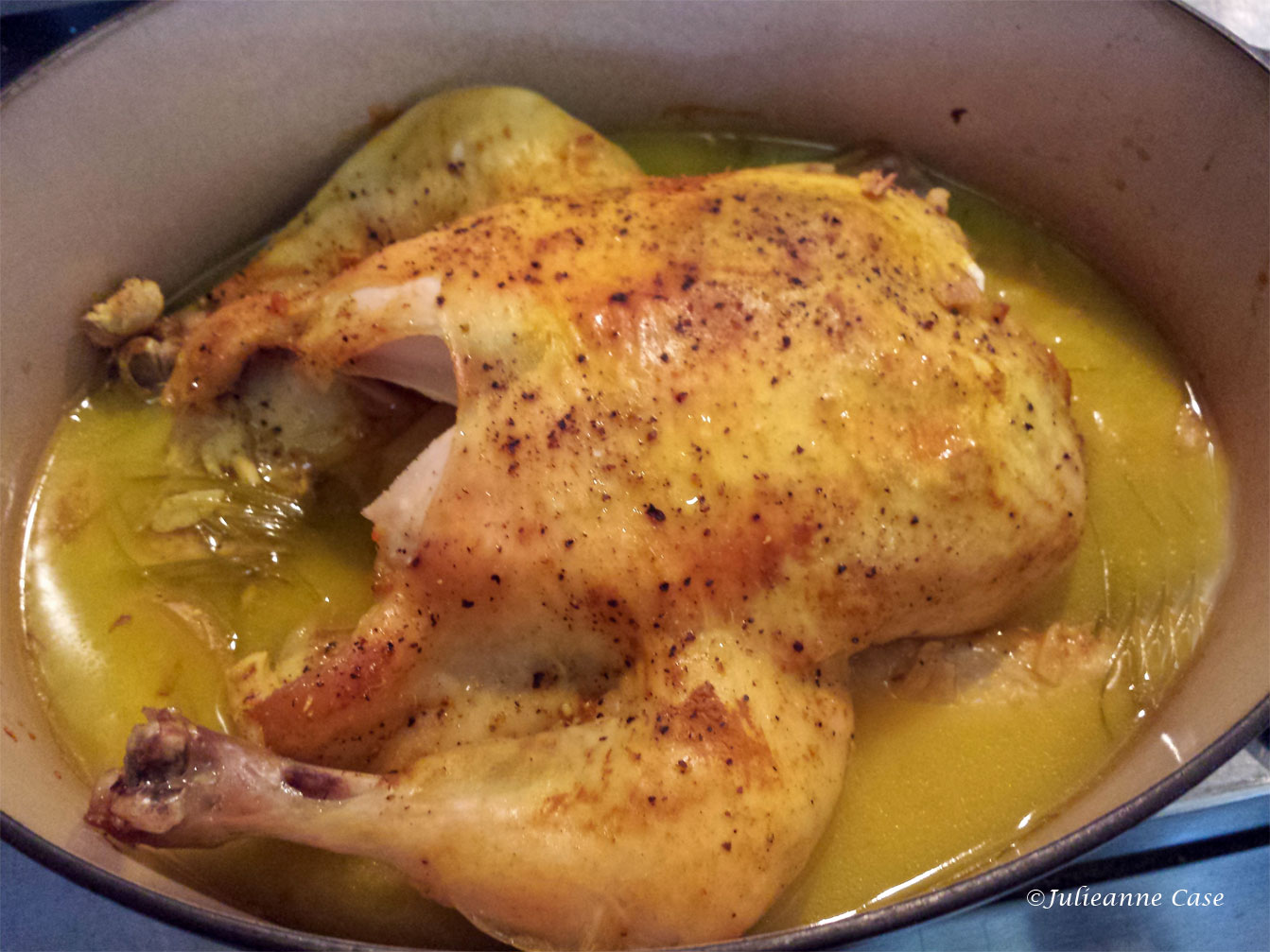 It has been several months since I blogged and I’m rather glad so many want this recipe that it got me back into doing a blog. Now I have a couple more lined up. One I actually wrote in April!

I named this Fusion Chicken because it’s got Chinese, Thai, and Indian seasonings. Please let me know if you have a better name. Leave it in the comments for  me.

I’ve been making this chicken for my husband and I for the last few months. It’s a recipe that started with a modified Jaime Oliver recipe of Chicken in Milk that used coconut milk. That appealed to me more. I tried that one but Ron (hubby) didn’t like the cinnamon in it. It wasn’t thrilling me but I liked it.

So I began to play. Over several tries and checking various recipes, i would add this and that ingredient. I finally arrived at this version which we really enjoy. It has this amazing aroma and the taste is multi-layered.

I like to use organic chicken because the flavor is better and it’s better for your health.  I get my chicken from Main Street Meats in Ventura. And I use a Le Creuset 3-1/2 qt oval dutch oven. I know they are expensive but this one is probably 34 years or older. I don’t even remember when I bought it.

It’s really an easy recipe. The majority of the work takes place before you put it in the oven. At the bottom, I’ll give you more details on the ingredients. And I’ll add more pictures that I’ll take when I make it next. Here is the list of ingredients:

Preheat the oven to 400 degrees.

Next is seasoning the chicken. If you are using fresh turmeric, then you will want to grate some in a bowl. I found it easier to use dried for rubbing into the chicken and using the fresh in the cavity and dropping some into the coconut milk. I lift the chicken skin up from the chicken so I can season under the skin. Just lift it enough to get your hand under it. And you will have to break through some thin connecting tissue. I find that if I start from the neck region, the skin tears less. I rub the turmeric under the skin over the breast area. I then rub some more on the underside of the chicken and on the legs. I put some fresh or ground in the cavity along with pepper and himalayan pink salt.

Then I put the lid on the pot and put it in the oven. I leave it in the oven untouched for at least an hour and a half. When the chicken leg moves easily or you see that the skin on the leg has pulled away from the ankle, it’s done. I found a 3.5 lb chicken is usally done in 1.5 hours, a 4 lb one about 1.75 hours.

To serve, I take the chicken out and cut it up or pick up the pieces if the chicken falls off the bone and put them on a plate. I strain the pan juices to remove the chopped seasonings. I pour some over the chicken and put the rest in gravy boat or bowl.

If you want or need some help with some of the ingredients or quantity suggestions, I have some pictures here to assist.

My Le Creuset Dutch Oven -You can see it looks brand new  it gets used a lot. 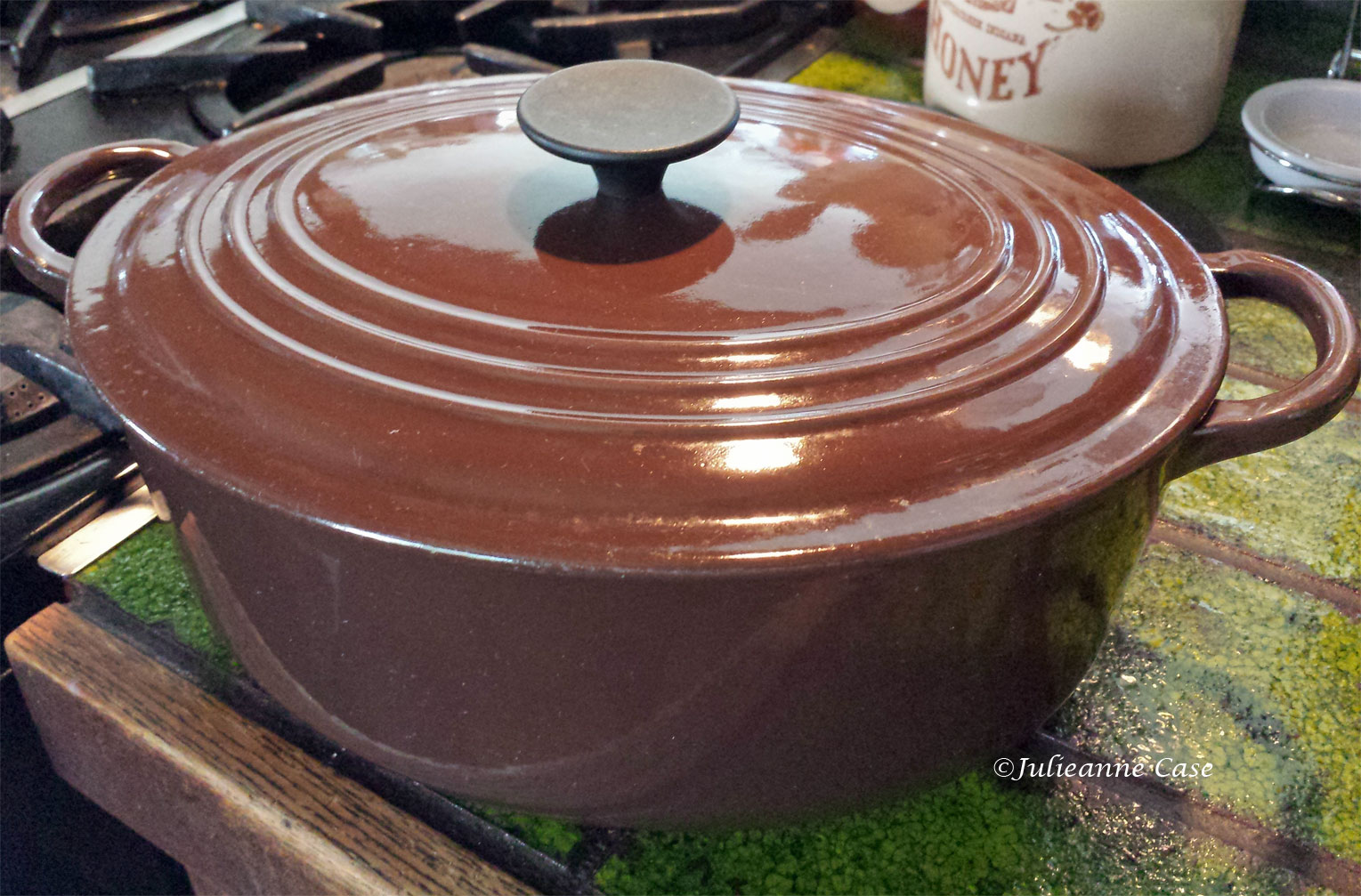 Some grocery stores will sell lemongrass in the herb containers.  They are long stalks to they are trimmed and cut in half to fit in the boxes. Some local farmers markets will sell the full stalks.  I have found these in Whole Foods and Vons . I have sometimes found the lemongrass at the Channel Islands Farmer’s Market on Sundays. 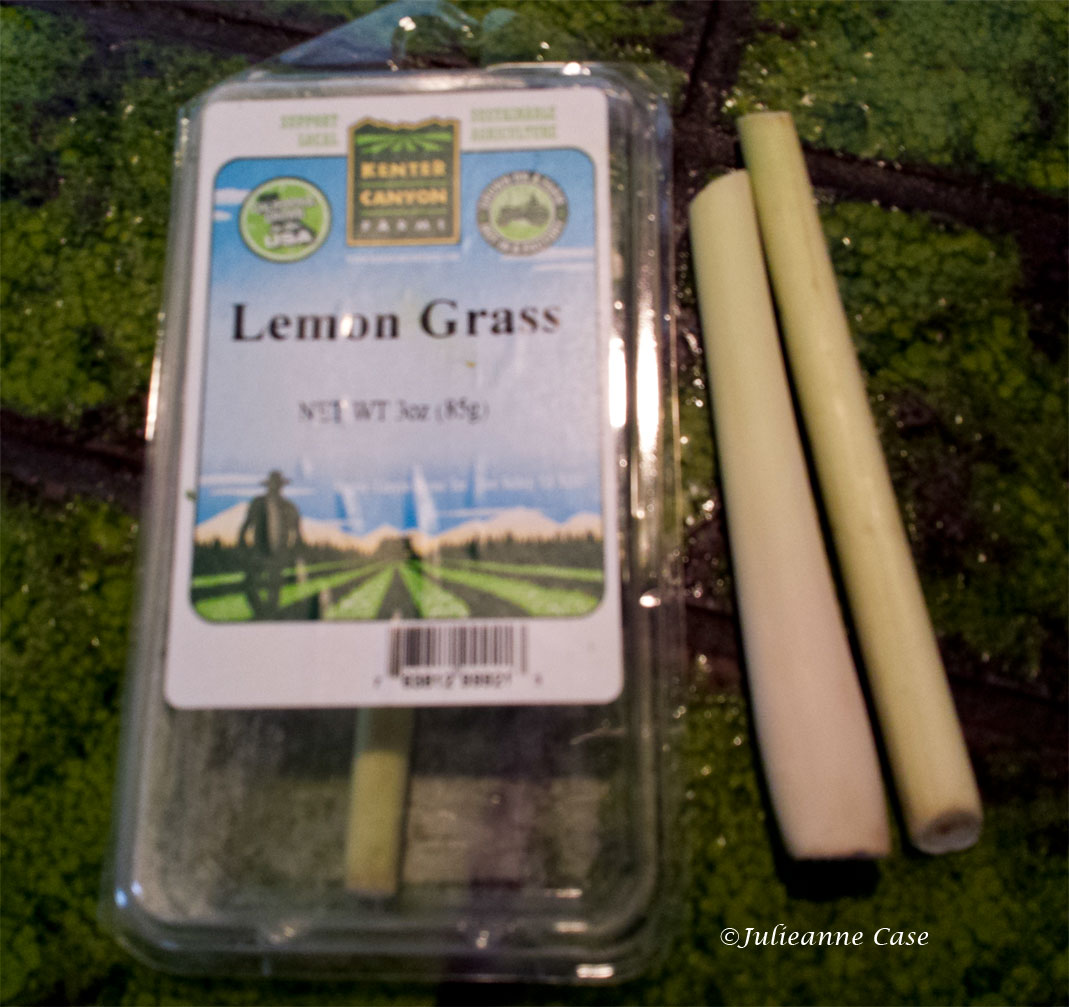 Turmeric is a rhizomatous herbaceous perennial plant of the ginger family. It is smaller and a beautiful bright orange color. The pieces in this picture are about 3 inches long. One piece was grated and you can see the lovely orange interior. 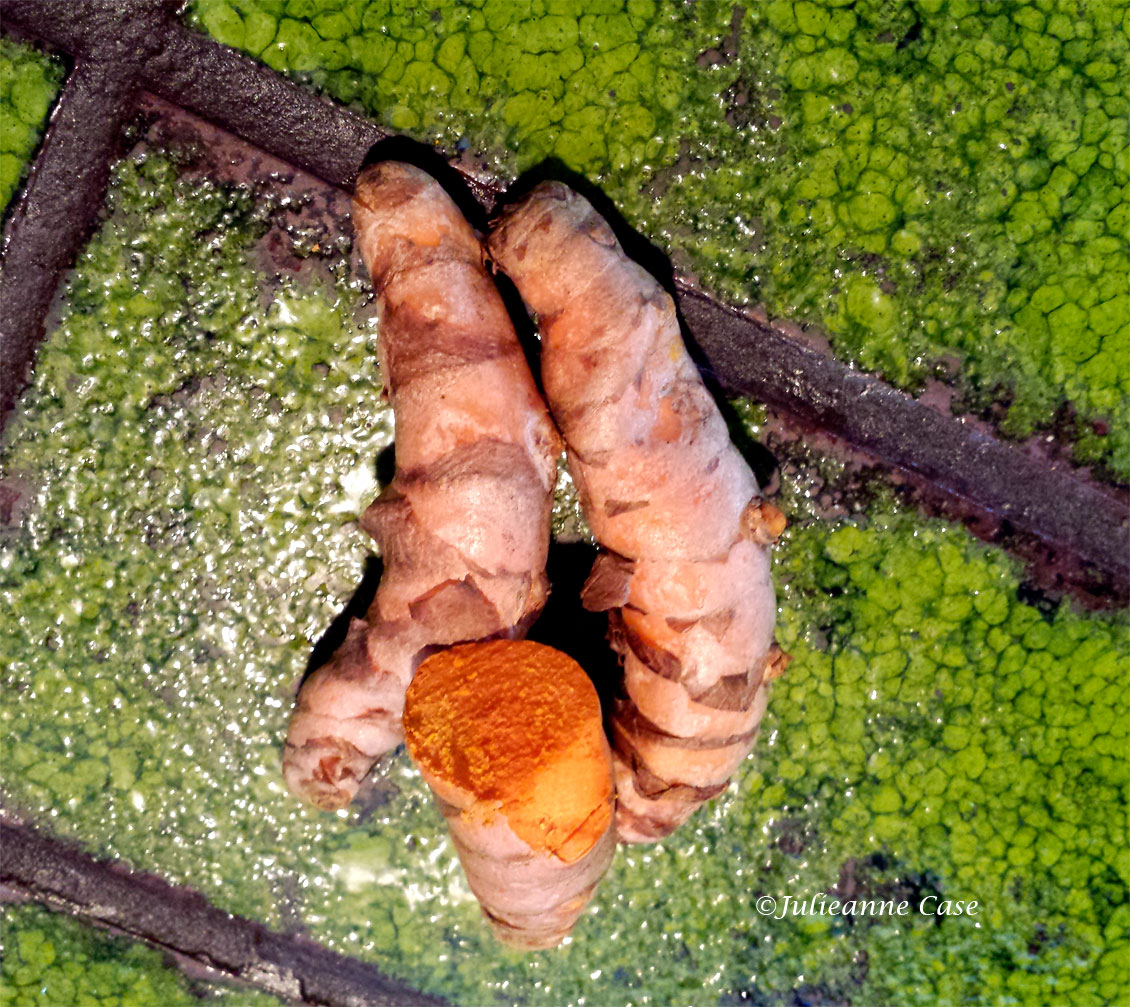 Ginger most everyone knows. But I took a picture to give you an idea of how much I use. The tile is about 7-1/4 inches by 3-3/4 inches. I would easily use about 1/2 of this piece.  Why? I love ginger. Please feel free to alter the quantity. I have also gotten this at the Channel Islands Farmers Market and I’ve seen it fresh at Whole Foods. 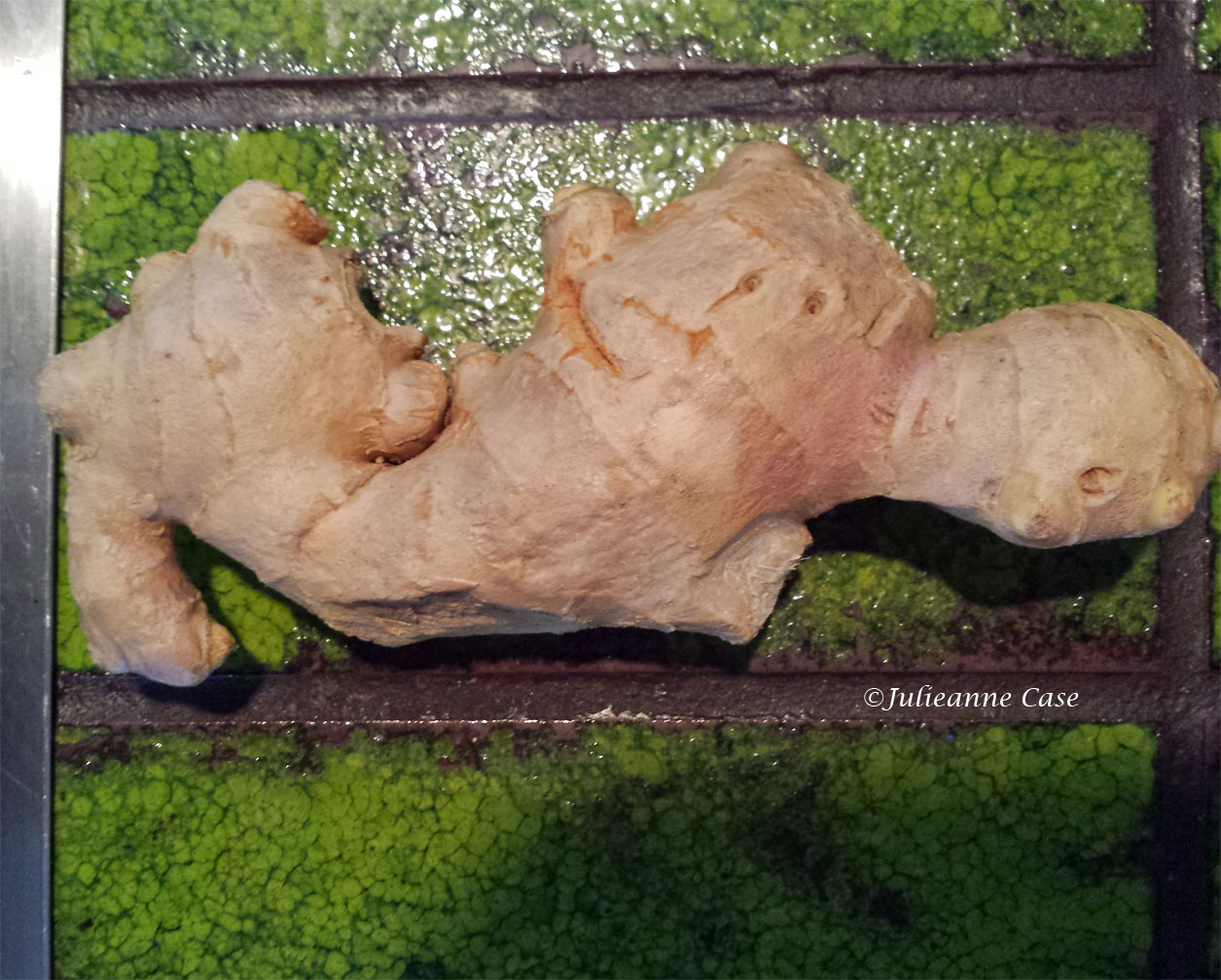