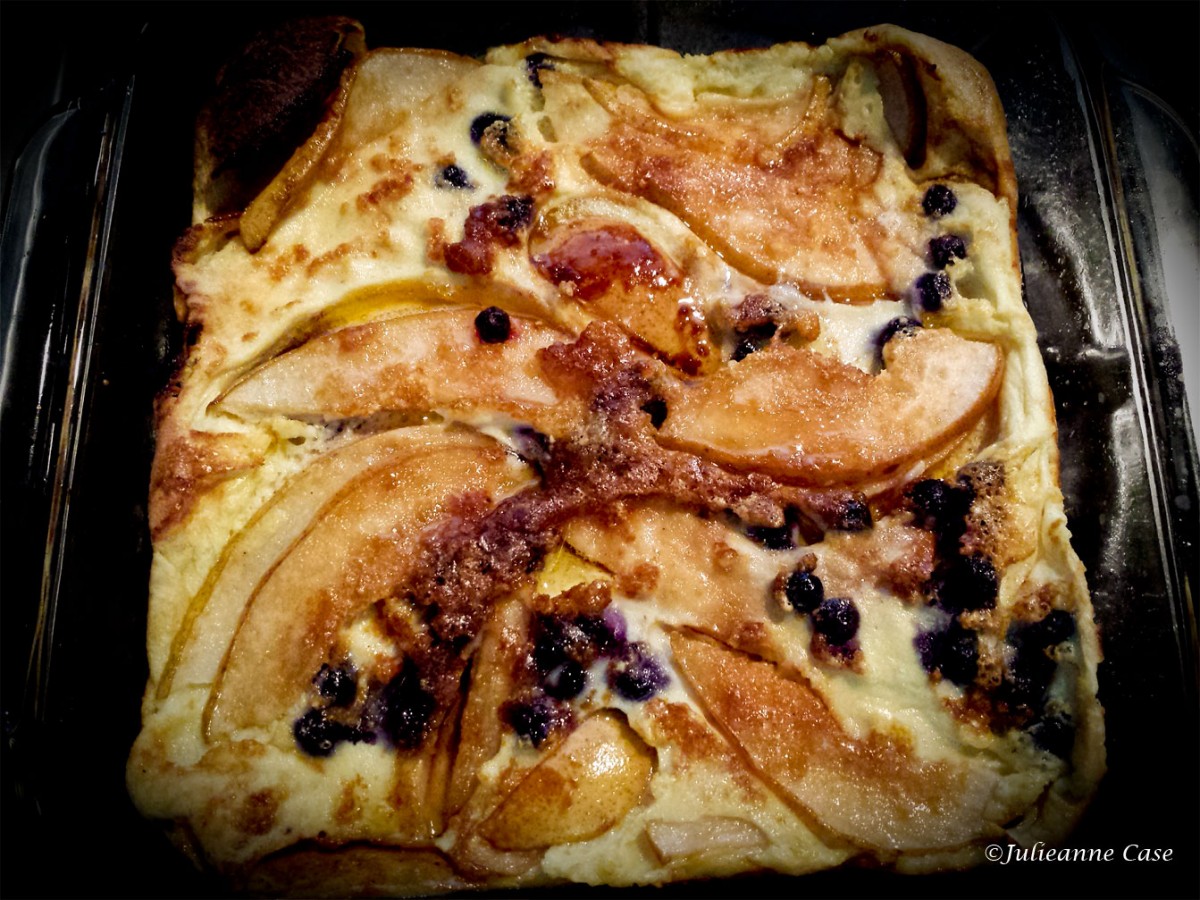 Puffed Pancake with blueberries and pears

The other day I posted a picture of our Thanksgiving breakfast dish. I have made this dish on days I deemed special over the last 30 plus years. The Marlene Sorosky cookbook, Cookery for Entertaining,  is falling apart! I’ve also made her Frozen Lemon Cream served in hollowed out lemons.

Marlene Sorosky had a cookware store and I had attended a class there with French chef, Jacques Pepin. What a delight he was. And during the class Danny Kaye dropped in and showed Jacques how to make these special Chinese Chicken Lollipops, made from the wing segments.

It was a delight to see a world-renowned chef so open to learning something new. Both of my Jacques Pepin cookbooks were signed by Jacques and Danny.

Okay, back to breakfast. There are a few recipes in this cookbook, that was published in 1979, that I really like. The Apple Puffed Pancake is one of them. I’ve played with this over the years and put in different fruits.

It takes about 10-15 minutes to prepare, then 20 minutes to cook. It puffs up like a souffle and falls some as it sits. But it’s festive looking, a delight to eat and impresses any guests who are lucky to have been invited to join you.

Here is your recipe:

Preheat your oven to 425 degrees F. Mix your eggs, milk, flour, sugar, vanilla, salt and cinnamon in a bowl until blended. Put the butter in a 13″x9″ baking dish and put it in the oven to melt. Once melted, add the apple slices and put it back into the oven until the butter begins to sizzle. You don’t want the butter to brown. Remove the dish at that point, pour in the egg mixture over the fruit and sprinkle with brown sugar. Put it back into the middle of the oven for 20 minutes or until puffed and brown. Serve immediately. It will serve from 4 to 8. 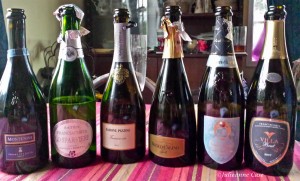 I have also added powdered ginger along with the cinnamon or instead of as well. But then I love ginger. And I haven’t tried the coconut milk yet but I may! It might be better to try some coconut cream mixed with coconut milk.

Let me know how you like it if you try it. I often halve the recipe for my husband and myself and use an 8″x8″ pan. If I had bacon or sausage or a big bowl of fruit and toast, I might have leftovers. But we just finish this off easily and feel pampered.

I’ve also served this with a bottle of champagne on special occasions. It would be lovely to serve Franciacorte Sparkling Wines from Italy for this, especially the Franciacorte Villa Brut DOCG, if you are lucky to find it near you!

Do you have any special recipes you save for special occasions?  How do you celebrate special days? Do you ever cook something elegant just for yourself?

Julieanne Case came from a left brained world, having been a computer programmer who worked on the Apollo missions and, due to circumstances orchestrated by God/Source/Universe, joined the growing ranks of the right-brained world starting in 2001. She became an energy healing practitioner in 2004 and has studied various techniques. She is a Reconnective Healing Pracitioner, a Reconnective Artist, and a blogger. She assists you in reconnecting you to your original blueprint, your essence, your joy and your well being! ©Copyright Julieanne Case 2013