Relationship Advice: Give Up the Need to be Right

How many arguments have occurred with your spouse or significant other because each of you wanted to be right? If neither of you gave relented, how did it end? You didn’t speak to each other? You thought the other was an idiot or stubborn or just plain wrong? Did you ever wonder what in the world you saw in them in the first place? That maybe you made a big mistake here?

Think I’ve experienced any of that? You bet I have. I fought tooth and nail and got really mad. You see, I had to be right. For me, it was a matter of life and death. If I was wrong, I would die. In my warped thinking, I would have been devalued in my own eyes and I believed that my husband would think less of me as well. I could not chance that.

We had put in new oak floors and an oak railing around the staircase. We were sanding the railing, staining the wood and varnishing. Ron had taken over where I had stopped. He then accused me of something, something that I should have done but didn’t.

I stood there, for what seemed like hours, yet were only seconds – I hadn’t said a word- no reply – no retort – no counter response defending myself. In that moment I realized I had a huge choice. (For me, it was huge.) What he had said was true. I knew it. Do I tell him he’s right or fight to the standoff? I felt I would die, literally die physically, if I admitted he was right. The adrenalin was pumping and I was quaking in every fiber of my being.

I decided this was it. I had to do it even with everything inside going nuts. I admitted he was right. Surprise – I didn’t die. I stood there amazed, waiting. He never said another word. It was over, just like that. He went back to working on the railing and I continued what I was doing.

That was the start of my freedom. Over time it got easier and easier to not be right. Fights were averted. Life became more pleasant. 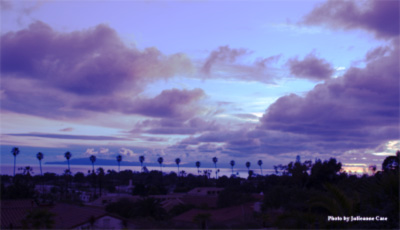 After the storm, the clouds began to break up and the sunset could be seen

Soon I found that if he asked me a computer question or something I should know and I didn’t know, instead of bluffing or changing the subject, I began saying “I don’t know but I could research it” or simply “I don’t know”.

Funny thing is the other day I told him he was right and he said “What, I am right? Did you just say I am right?”. I laughed and said “Yah, don’t let it go to your head. I’m sure it was a fluke!” We both laughed.

Do you have arguments the make one of you wrong? What is the common element to your arguments? Have you noticed if you argue more or less these days?