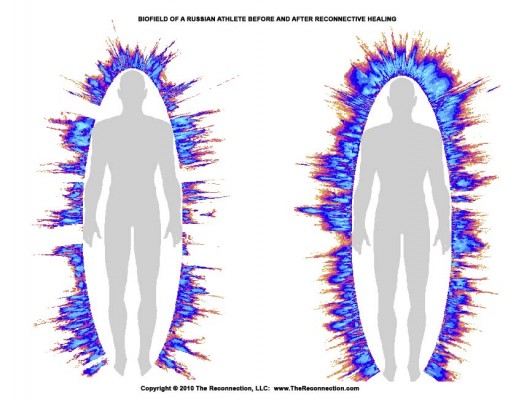 Biofields of one person – Before and After Reconnective Healing™

In my earlier blogs on the scientific results done with Reconnective Healing, I talked about the studies done on plants and then I began to list some studies done on humans. Today I’m sharing a study done in Russia. I verified this information with additional research and used much of the information I found on this from Doug De Vito who was an instructor with the Reconnection and is the author of new book coming out soon by Hay House called The Upgrade.

They tell us this story at the training seminars. Reconnective Healing was being taught to a team of Russian doctors, therapists, researchers and the Olympic athletes. The results were astonishing. They designed the study to give the test subjects 5 hours of teaching and interaction with the frequencies over 2 days.  I find it interesting that the Russian medical community is more open to energy medicine than here in the US.

Each of the seminar attendees were measured before, during and after the seminar with various testing methodologies. One of those measuring devices was the EPC device that measures the bio-energy fields around the body. The measurements of this device are accepted by the mainstream medical people in Russia and are used in the development of athletes for their various Olympic teams.

“When Dr. Korotkov measured the attendees during the experiment, he reported that “the results were very, very strong and very, very different” than anything he had measured before in his work with the athletes. Specifically, he reported that the effects of Reconnective Healing on the athletes and their energy levels were “hugely significant”. On average, each of the athletes and test subjects experienced a significant increase in their energy levels. On average the bio-energy field increase for each person was 17% or more! Korotkov was very impressed with the results as were the athletes, who reported that they could obviously feel the frequencies and the benefits they were experiencing in their bodies.”

Doug also stated that “the benefits of these powerful frequencies are not just limited to helping people with disease. Studies show that they go far beyond the traditional definition of “healing” and into new realms of improving and upgrading a person’s physical being, athletic performance and mental function.”

Another amazing result from this study was about a young athlete who had arrived with a broken leg.

“One of the athletes arrived at the class with a broken leg and on crutches. He had broken his leg just four days before and was experiencing significant pain in it. Further, he was unable to bear any weight on that leg. During the course of the two days, he spent some time on the table and after just these few interactions with the frequencies, he was able to put away the crutches and walk without them! What’s more is that he was able to do this without any pain and shared with us that he was very much looking forward to his doctor’s appointment the next day. The doctor was amazed at the progress in the athlete and was stunned by the healing.”

Many more statistics came out of this one study. For more on this study, you can read the article by Doug De Vito.

Maybe now you can understand why I find it difficult to talk about Reconnective Healing in 30 seconds.