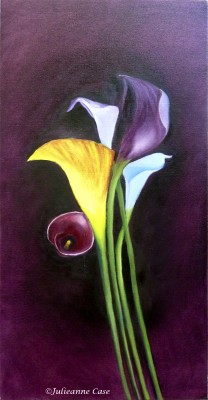 In my last blog I explained how my friend and poet Gwendolyn Lawrence Alley and I collaborated for an art show put on by the Ventura County Arts Council. This is another of the three which we submitted for the show.

Gwendolyn had a larger poem she had done for Calla Lilies. She sent me the link to it and we collaborated on it and reduced it down to two stanzas.

It was an interesting experience to collaborate on an art project. You need to listen to what the other wants to do or their take on something you’ve chosen. There is a give and take going on that results in a different end result from the pieces that came together individually.

I enjoyed working with Gwendolyn. She was easy to work with and we both made changes to accommodate the other.

The painting is called Plum Surrounded. I fell in love with the photo but made artistic changes to create my painting and. These are favorite colors for me and I love to paint with them.

For the final piece, you can see and read about the Water Ballet.

Here is an adaptation of Gwendolyn’s Poetry for Horace Bristol’s Easter lilies: