We were going to a wedding in Oregon, a granddaughter was getting married.  Flying isn’t as much fun as it used to be so we decided to drive.  And road trips can be a lot of fun. What I love are the surprises.  I had never been north of Sacramento on highway 5 before. And I was quite startled at the beauty that lay before us. I love California because of its diversity from the mountains to the desert to the beaches and more.  I’ve always known this but I got another surprise when we got north of Redding, Ca.

I’ve heard of Lake Shasta over the years but I was surprised at how big the lake is and it’s just beautiful. Unfortunately, trying to get a shot of it at 70 mph is near impossible. 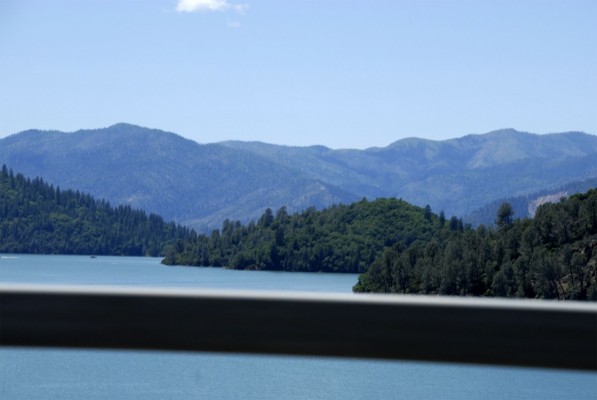 But the biggest surprise was Mount Shasta.  I’ve heard and read about Mount Shasta healing retreats.  It has some major energy mojo, described as a cosmic power plant by some.  I do want to visit there and spend some time. I never saw a picture of it or if I did, I didn’t let it register.  It did take my breath away.

So we’re driving north on I-5 and it’s beautiful.  We saw so much farmland and rice fields. I’d never seen a rice field before either.  Then we began to climb up and we went around a bend and WOW, it was right there.  And it was huge and covered in snow.  I just realized that I didn’t need to ask what it was.  I knew it was Mount Shasta.

And it loves to play peek-a-boo as you drive along the winding highway of I-5. You go around a curve and it’s gone and then when you least expect it, there it is again.  So the game was on and I was watching for it to show its magnificence once again. 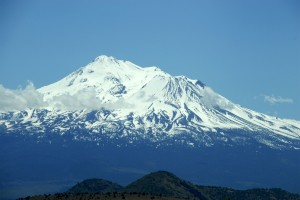 The thing is there is so much beautiful scenery.  We climbed up to over 4000+ feet and we still had many mountains around us covered in trees. Then we leveled out but we were still at 1500 ft or more and I’d never seen terrain like this in California.  The land looks like deserts but then again not quite.  There were large grazing grounds and we saw cattle and goats.  We saw a sign for Limousin cattle.  I’ve only ever seen the term Limousin in regards to French oak barrels!  But instead of tumbleweeds, we’d see pine trees dotting the landscape sporadically, rolling hills and grazing land everywhere.

So on our trip home, I was ready. I had the big camera out and ready for the peek-a-boo game.  Still it’s hard to catch on that windy road but it was fun.  I’m ready to head back, to find spots where we can stop the car and take a longer look and more shots.

What surprise did you find on one of your trips?

Julieanne Case came from a left brained world, having been a computer programmer who worked on the Apollo missions and, due to circumstances orchestrated by God/Source/Universe, joined the growing ranks of the right brained world starting in 2001. She became an energy healing practitioner in 2004 and has studied various techniques. She is a Reconnective Healing Practitioner, a Reconnective Artist, and a blogger. She assists you in reconnecting you to your original blueprint, your essence, your joy and your well being! ©Copyright Julieanne Case 2011