So what do you do when you get a call that your niece and great niece that you haven’t seen in several years may be in your almost vicinity for a day or less?  There is no question that you want to see them.  They are driving in from Ohio.  However, making plans isn’t going to work because

So I start thinking, ok, how long will it take for me to get them and drive to say Santa Monica beach or Malibu? Google to the rescue.  With construction on the 405 and times varying from 35 minutes to 1 3/4 hours, I must come up with another plan. 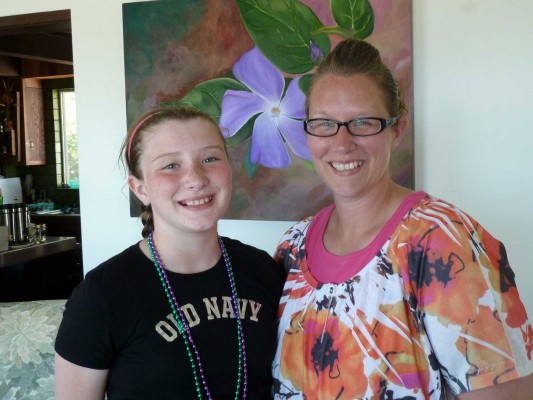 In talking with some friends, they said bring them back to Ventura. You got the beach, less traffic, take 126 from here to Valencia.  I started thinking about it and remembered there is  a Ventura rentals place on the beach.  Ok, some ideas in place.

Tuesday we learned they had arrived and that we can get them at any time Wednesday morning.  I planned to get up and on the road by 8am. My husband decided at the last minute to join me. We head out and get there in under an hour.  My niece Brandie I would know anywhere. Yes, I’ve seen pictures of Brynn but she was 2 the last time I saw her and she is now 10 and quite tall.  She had a ready smile and gave us a hug (works for me everytime!).  We headed back to Ventura.

Saturn Peaches at the farmer’s market

In one mad cap day, we stopped at the farmer’s market where they saw things they had never seen, tasted items they had never had and got lots of fruit for the trip back to Ohio. They got their first taste of Gaviota strawberries, organic blood oranges, cherimoya, pixie tangerines, Saturn peaches, organic veggie jack cheese.

Then it was off to the beach where we walked to the end of the Ventura Pier, rented bikes and rode up and down the strand.  Next we turn in bikes, drive to Ventura Harbor and have some great pizza at Milano’s.and head to the Ventura Harbor Boat Tour and ride around listening to corny jokes but learning some interesting facts too.  Final stop before taking them back, we go to the house again and let Brynn, the 10 year old pick strawberries and raspberries, oranges and lemons.  She was ecstatic. Everything was a new experience and she loved it!   Memories were made, laughter abounded, pictures were taken, misson accomplished. 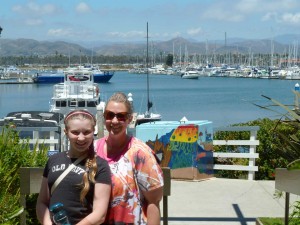 Brynn and Brandie at the Ventura Harbor