Mindful of One family: Remembering a Life with Sadness

Funny how life’s reflections start when you learn a family member has passed.  Yesterday I learned that my cousin Joanne had passed.  You may say it’s just a cousin.  She was however also someone’s daughter and someone’s sister.  I spent a lot of time with her when we were kids.  At one point, when my mom and dad got a divorce, my mom,  sister and I moved in with Joanne’s family which included her mom and older sister, Loretta. Her father was my godfather who had passed before we moved in.  So for a few years we all lived as one family. We were childhood playmates and schoolmates. 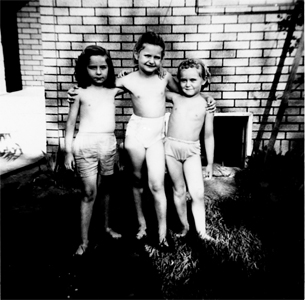 As things happen in families, Joanne and I were often compared since we were so close in age. The results were stated as such: “Julie is really smart but Joanne has the beauty” or we would hear “Joanne is so pretty but Julie has the brains”.  You can imagine what resulted from those little sentences said over and over again.  For years, if not decades, I was totally convinced I was ugly and Joanne lived under the delusion that she was dumb. She struggled with that her entire life never overcoming that belief. To make matters worse for her, the doctors gave her a label cemeinting that belief. Jealousies abounded between us.  Which was more favored: the brains or the beauty?  A rift was created that was never quite bridged along with deep seated suspicions fed by the mothers. When I was in my twenties, Loretta and I figured out what our mothers were doing. Our mothers had an ongoing jealousy match and we kids became unwitting pawns in their game.

Joanne got to attend a charm school and learned lots of beauty secrets. She always looked perfect.  I don’t know when she found her church she loved.  She became a devoted member of the church and for years she donated her time doing the makeup for those on the television show.  That church became her life and her religion was her solace.  She had a deep faith that sustained her.

Some family members are devastated, some are upset that they had no clue she was dying, some are upset at being left in the dark.  Yet all of what Joanne did to isolate herself from everyone and keep many in the dark, she did for herself.  So often we take things personally and it’s not necessary.  As Don Miguel Ruiz puts it: “Don’t take anything personally. Nothing other people do is because of you. It is because of themselves.”

In remembering her life, I felt a sadness for all the time she lived believing she was dumb. How close might we have become had we not been made unwitting rivals? Loretta and I are more like sisters than cousins.  What might have happened had Joanne believed more in herself?  When a child hears their parents labeling them, it makes a huge impression.  To be labeled by a parent can have life long devastating consequences if the comments impart negativity or cause limitations. Parents need to be more mindful of how they speak about their children when the children can hear or overhear.    Now I’m going back more to be there for Loretta, to see my other cousins and sister and do one last thing for Joanne.  To honor her life as she saw fit to live it.

I believe this was all a result of unquestioned thoughts and feelings. I believe it is important to question any thought, any belief before you take it as one of your own. Kids should be taught that early on!  What other people think of you is none of your business as Byron Katie often says.

What conversation did you hear as a child that left you with an indelible mark in your life, whether good or bad?