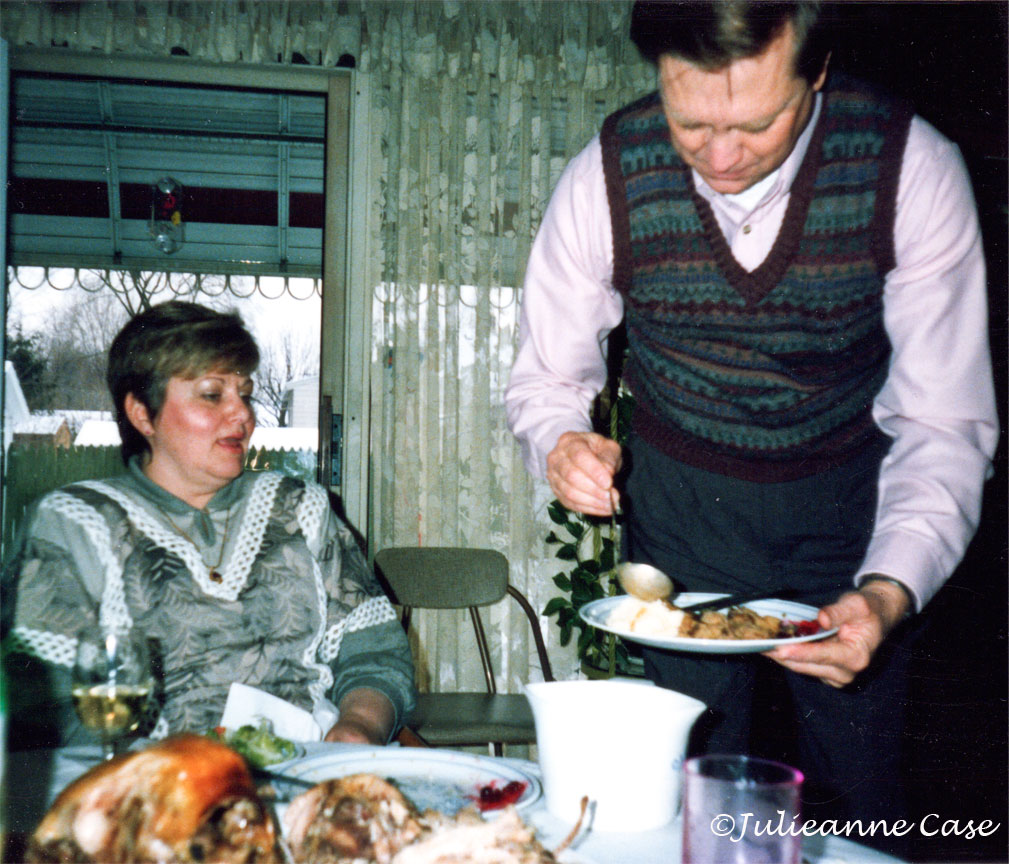 My mom was a very good cook. At our family Thanksgivings, we rarely had turkey. To this day, I’m not a huge fan of turkey, well, until recently, when I discovered Diestel Turkeys. But that’s another blog. What we had for almost every Thanksgiving and sometimes Christmas as well was fresh capon.

For those unfamiliar with capon, it’s a castrated rooster. We would order them fresh from the farmer. My mom liked them because they had a much larger breast which held a lot of stuffing. And they had smaller sizes for our smaller families. You could get 8-11 lb capons. Even when we had larger gatherings, they would just get two capons. We all just loved them for Thanksgiving.

Ron and I were scheduled to go back for Thanksgiving one year. We both got sick and had to postpone for two weeks. My aunt and mom had prepared two capons. They put them in the freezer and when we got there, they defrosted them and cooked them. I miss having capons. I have found them frozen only out here. I can’t believe I found a picture from that trip!

Mom made the best stuffing and I still make it. It’s very basic but one ingredient she added to the stuffing that just perks up the basic stuffing is white raisins! They have to be the golden raisins, not black. And the other thing she added was the turkey liver minced up very fine and cooked in butter along with the onions and the celery. It is really perfect stuffing as far as I’m concerned. People who hate liver would eat the stuffing and rave about it. Shhhh! Don’t tell.

I’ve tried other stuffings too. I have added roasted chestnuts to Mom’s recipe and I do like that but it makes for a much richer stuffing. We always did the mashed potatoes. Cranberry sauce was from the can and I didn’t like it. We did have gravy and pumpkin pie.

We preferred sweet potatoes to yams but I don’t remember having them at Thanksgiving. It’s not a strong memory. We did have sweet potatoes in the fall. We would bake them whole and open them up and put salt and butter on them. My one aunt would do the yams with brown sugar and marshmallows but I never liked them. They were too sweet for me.

I modified things for my Thanksgivings. I sometimes did turkey. I would sometimes just stuff a chicken if it was just a small gathering. When it was just Ron and I, I have done Duck a l’Orange or Duck with sauteed apples in glace de viande or a small prime rib or a rack of lamb. We did have a capon a few times, frozen, I know but it’s all I could get out here. And I make a great cranberry sauce with orange juice and ginger!

What is your favorite Thanksgiving food memory? Do you ever meander from the traditional?