In my previous post, I talked about getting started cooking. In this one, I’ll continue on with my lessons from mom. My mom was one of the cooks in the family. Her sister, Aunt Louise, was not.  Aunt Louise cooked but she did it out of necessity. Mom enjoyed cooking and loved to feed people who came over.

We always had chops, cubed steaks, and ground meat. My aunt had a drapery shop. Between the decorators, workmen and sometimes clients, they would often get some venison too. I grew up eating lamb, pork, and beef. We ate liver and onions which I still love but rarely eat anymore (more on this later). 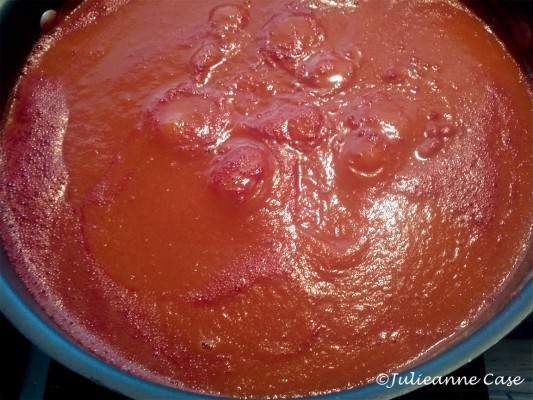 Pot of tomato puree from the garden tomatoes

My mom always broiled chops, chicken breasts and steaks. She would put salt, pepper, garlic powder and Italian seasonings on the beef, pork, chicken or lamp chops. We loved rib eye steaks with the bone and that was broiled too.

I remember us buying those for a 1.49 a pound!   It was all cooked medium rare except for the pork chops or the chicken. The final touch was a pat of butter before putting it under the electric broiler.

We also roasted whole chickens. Mom would buy fried perch from the local restaurant bar. I remember walking home with a tray of the fish for us to eat.

Lessons continued. She taught me to peel and cut potatoes to saute in an iron skillet with olive oil, salt and pepper. Cooking them with medium heat or lower, they would slowly cook and brown. Still one of my favorite ways to eat potatoes. We ate it frequently along with buttered corn, a chop and always an Italian salad with  tomatoes, onions, iceberg lettuce and parsley and sometimes cucumber.

She also would cut up potatoes in chunks and roast them in the oven with rosemary, olive oil, salt and pepper too. I would watch her make spaghetti sauce, meatballs, pork and sauerkraut, stuffed cabbage, vegetable beef soup, pasta fagioli (more on this later!) and my all time favorite: Italian Wedding Soup. I would ask questions and absorb it all. I grew up thinking that stuffed cabbage was Italian because mom made it. It wasn’t until years later I learned she learned from a Polish neighbor when she was growing up along with the pork and sauerkraut dish.

Sometimes my sister and I would love to cut good Italian bread, cover the bread with the spaghetti sauce for a snack. One day we did it so often that when mom came in to get dinner together, she lifted the lid and found the sauce just about gone! I don’t remember what we had for dinner but I’ll bet my sister and I weren’t that hungry. I also remember how much spaghetti we could eat. I marvel at the amount we could eat back then. I can’t imagine doing that now.

What are some of your family food memories? Are there any that stand out in your mind?