It’s All about the Moon! 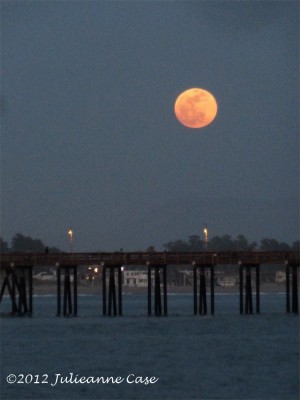 My moon shot over the Ventura Pier

We headed out to the Ventura promenade the night before the super moon night to check out good photo positions. I know there are tons of photos of the moon over water in a stock gallery but I wanted one of my own! And I wanted one that was orange and big! We have many great photographers in Ventura.  I consider myself a wannabe!

I’ve lived here for close to 32 years. I’ve been to the ocean, listened to the surf, photographed it in its’ many moods at many times of the day. Somehow I missed one thing. I’ve never been at the promenade near a full moon. Well, at least not at the rocky section of the promenade. I’ve known we have a lot of rocks and boulders in Ventura. Our house is on an ancient river bed and we can get some pretty massive boulders when we start digging in our yard. We found some massive ones when we began putting in a vegetable garden.

When Ron began working on the vegetable garden, he saw a rock that needed to be dug out. He dug and dug and dug and dug and dug some more. That “little rock” turned out to be a huge boulder that had to be leveraged out of the garden area! So I know Ventura has some rocks along with the hardscape, gardens, beaches and sand!

I’ve also seen the rocks at the shore. However along the promenade, the rocks line the walkway wall along the beach. Again, it never really registered. Until tonight. You see the full moon results in a nice high tide. A lot of the beach was under the water. And the waves were crashing onto the closest things: the rocks lining the promenade wall.

Clouds along the horizon delayed the viewing. I’d been listening to the waves crashing, a sound I love. This area still had some sandy beach. We decided to walk along the promenade to investigate a better perspective. Soon I heard a sound I’d not heard before. It sounded like bubbles or bubbling or babbling and I loved it.  I stopped and asked Ron if he had heard it.

He said it was the ocean moving the rocks. I was mesmerized. I had to record the sound. I just loved it and couldn’t get enough of it. Sometimes it sounded like there was a undercurrent of thunder under the waves!   The next night I got my moon shots, one of which I shared above for you.

Have you ever heard this before? How do you like it?