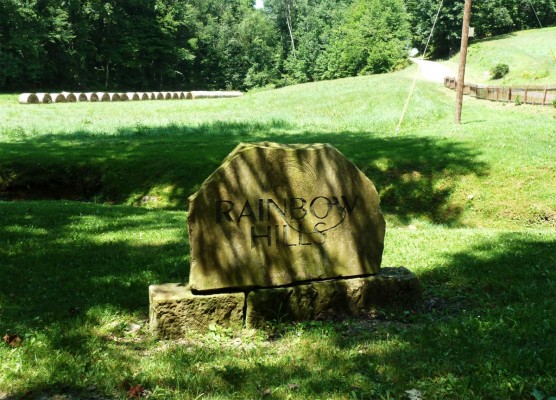 A pretty pool of water with a fountain in the middle stood in front of buildings and a gazebo shading some picnic tables. Behind the gazebo was a little bed and breakfast I was told. From the wine tasting room to the B&B structure was a open wooden structure that had more picnic tables under the canopy of trees that surrounded this sight.  We climbed up the stairs to this funky building. Inside looked like an old time bar, small, wooden.  But at one end, there were refrigerators that kept the wine cool for tasting. It was getting hotter. The lady had a German accent. Ray said on Fridays and Saturdays they have steak dinners. They hand you the raw steaks, you pick a table, barbecue it yourself and they bring you the rest of the food to your table.  Yellow Butterfly also offers steak dinners on the same nights. 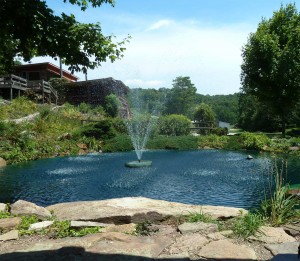 So Ray and I were tasting the whites and the hostess controlled the order of the wines. Neither Loretta nor Rosy drink much wine. Ray and I needed to find a wine that the four of us would like for our picnic. (Ray had a big surprise for us!)

When Ray and I thought they might like a wine, we had them taste it. We all liked the Traminette. It was the best wine for all of us. It was styled on Gewurtztraminer and it was done semi-dry, a very nice balance. Everyone liked it!  We had a hit. So we got it for our picnic.  Ray had bought a couple of wines from the Yellow Butterfly and a couple here.  I bought a Rainbow Hills Traminette to share with my one niece and nephew who are just starting to learn about wines.  It would be a good starter wine for them.

So with our wines in tow and our glasses from our tasting, we headed outside to pick a table.  We thought we’d be cooler sitting by the water and the fountain.  That may not have been the wisest decision!  The building behind us blocked the wind although once in a while, we got a big breeze. 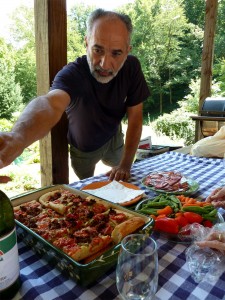 Ray had gone to the car, bringing a big tall square cooler and a rectangular ceramic dish filled with homemade pizza covered with fresh tomatoes, sausage and green bell pepper.  He had made a few pieces with no tomatoes. Ray pulled out a blue and white checkered table cloth and then some colorful Fiesta plates. The sausage was placed front and center followed by a plate of fresh pea pods, carrots and baby bell peppers and a platter with two kinds of cheeses and a wine salami and a peppered salami.  Fresh strawberries were for dessert. The pizza was amazingly delicious!  It was all a delight for the eyes and for the tastebuds!  It was a feast that resulted in many ohhhs and ahhhs.  It all tasted as wonderful as it looked.  The strawberries were sweet and delicious for dessert and the wine went very well with it all.

Just as we were coming to the end of our repast, we got to meet a springer spaniel who was a friendly little sweetheart.  Then we had to pack it all up, put the wine in the cooler where the food had been and head off to the next place. 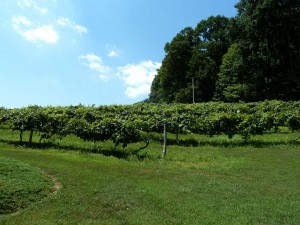 Grapes for our Traminette wine?