Buy Wines from a Ventura Winery?

While reading the paper this morning, I noticed an article about a new wine tasting event here in Ventura. I thought it might be fun to check it out but I knew Ron was working on a big project so I said nothing. He stopped for lunch and saw the article. He tells me what’s going on and asks if I want to go? Of course, I say, with a big grin. Soon we headed out. Always better when it’s his idea!

The winery is located in a warehouse unit. The reception area was nice. We were greeted immediately by one of the owners who gave us an introduction to Four Brix Winery. The name came from their travels and their love for four major wine areas of the world: France, Italy, Spain and California. These were considered their 4 sweet spots.  They chose brix since measuring brix is part of the wine making process.

We could wander around and soon found many wine making barrels. We checked the labels for what’s cooking, not all were in use. All of their wines are blends. They buy wine grapes from various regions in California from Paso Robles to Russian River Valley. They source eleven different varietals from nine regions based on which varietal grows best in which region. 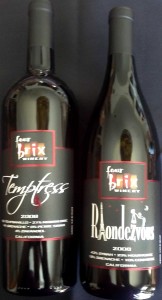 The Temptress and the Rhondezvous wines

They had 5 wines for tasting. Their wines have unique names, too.  Today we tasted Smitten (the only white), a rose whose name escapes me, and 3 red blends:  Temptress (a Tempranillo blend),  Scosso (Sangiovese blend) and Rhondezvous (Syrah, Mourvedre blend).  Both of us preferred the reds.  Ron really liked the Temptress,  I liked the Scosso and we both really like the Rhondezvous. Of the three, I think I like the Rhondezvous the best.  Once again we can buy wines and brews locally.

It was a fun outing. Then since we were out, I told him about another winery in Camarillo which had a Chardonnay I thought he would like. He agreed, so off we went.  You can read about Cantera Cellars  here!

Do you have local wineries in your city or county? What is your favorite wine to drink or beverage if you don’t drink wine?

Julieanne Case came from a left brained world, having been a computer programmer who worked on the Apollo missions and, due to circumstances orchestrated by the universe, joined the growing ranks of the right brained world starting in 2001. She became an energy healing practitioner in 2004 and has studied various techniques. She is a Reconnective Healing Pracitioner, a painter, and a blogger and can assist you in reconnecting to your youth and your vitality!