Stories Behind the Art 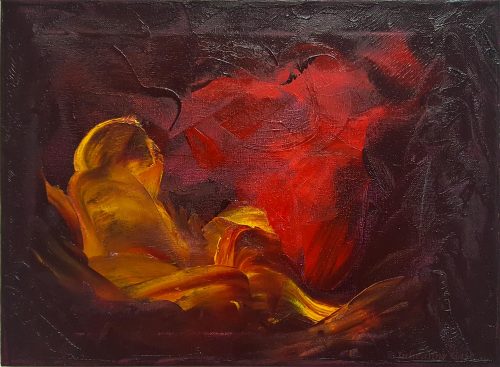 Forced into observing while evacuating from the wildfire.

I was asked to submit a painting for a local gallery, Buenaventura Art Association.This show is titled “Stories”. They wanted art that had a unique story about something that stick’s in the artist’s mind. For me, it was the Thomas Fire that hit my county and city of Ventura. That wildfire then continued to burn into Santa Barbara County hitting many other cities including Montecito. The wildfire burned many mountains in hard to reach terrain. It burned 281,893 acres and is now the largest wildfire in modern history for the state of California. It burned for over a month and controlled our lives for many weeks. It continues to affect our lives and will for some time. There are many stories. This one is mine.

I was on the computer and the lights flickered. After a few rounds, the house and everything around us went pitch black. I left the office to sit by the window and I saw an ominous dark cloud to the west.   “It couldn’t be the fire,” I mumbled to myself. It was a town away, in Santa Paula, which was north east of us. Yet something bothered me; a foreboding I couldn’t shake.

I told my husband who was in bed that maybe he should get dressed and lay on the bed. He just waved me away. I began to change clothes, putting on layers as the wind had been cold. I gathered up bags and suitcases and started stuffing in items. Suddenly  there was a pounding on the door and we were told to prepare to evacuate.

All the saliva left my mouth and no amount of water would moisten it. I went back to packing. At this point, the packing was haphazard and logic disappeared. I did grab a couple backup disks.

Being an artist, I got concerned about my art. “How could I take all my photos and my paintings?” I couldn’t!  I had to accept that. But one painting was in the middle of birthing. There were photos of the other paintings but this one needed a chance to come to life. I put it in the car. I had a few minutes to gather other important items and get the cars loaded.

When I stood at the kitchen window looking out into the dark night, I saw flames  growing on the mountain. It was time to leave. As we went out to the car, I took a picture of the glow between the neighbors’ houses across from us on the hillside. An avid photographer, it was the only picture I took that night.

We evacuated with our cars to Main Street but my husband Ron refused to leave the area. I sat and watched the glow grow brighter and soften only to return more vivid and relentless. At some point, I had shut down and become only an observer. We moved to another vantage point and I got out of the car and walked around a building to see 3 homes on fire. I was in detached observer mode. In shock, I didn’t even think to take a picture.

Everywhere I looked, I saw orange and red against the black sky. The city seems to be engulfed in fiery colors. The wind was relentless. It was all surreal. When I think back, I still feel like I’m watching a movie reel. Still the observer in a chair, watching the glowing flames consume my town from a distance, remembering the ash as it hit my face and smelling the smoke.