Final Collaboration of Paintings and Poetry with Gwendolyn Lawrence Alley

The last collaboration Gwendolyn Lawrence Alley and I did for the VCAC art show called Collaboration was with my painting called Water Ballet which is pictured on the left. It wasn’t one of the paintings I had chosen to go into the show. 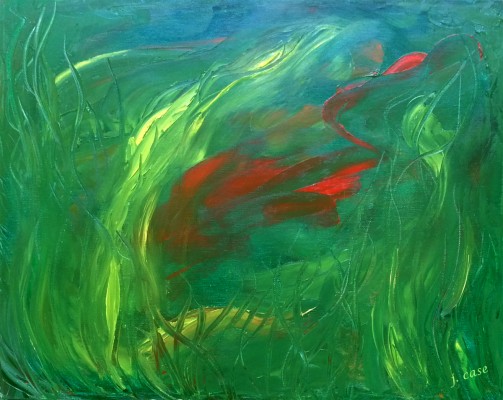 However, when Gwendolyn came over to see the paintings, it was one she was immediately drawn to. I had had it in a prior show so I emailed to ask if it could be resubmitted. They said since it was coming in with a written body of work, that it would be a new body of work so we could submit it.

Thus one morning at 3:15am when Gwendolyn woke up with her August 3:15 experiment, a haiku was born for the Water Ballet. What was interesting to see is how each piece brought out a dimension in the other piece that was not there before.

Of the three, one won an honorable mention and that was wonderful.  It was a nice addition to our collaboration.

If you missed the previous blogs on the collaboration, you can check them out here: Plum Surrounded and Serenity.

Have you ever done a collaboration? What was your experience? If you haven’t, would you consider doing one?